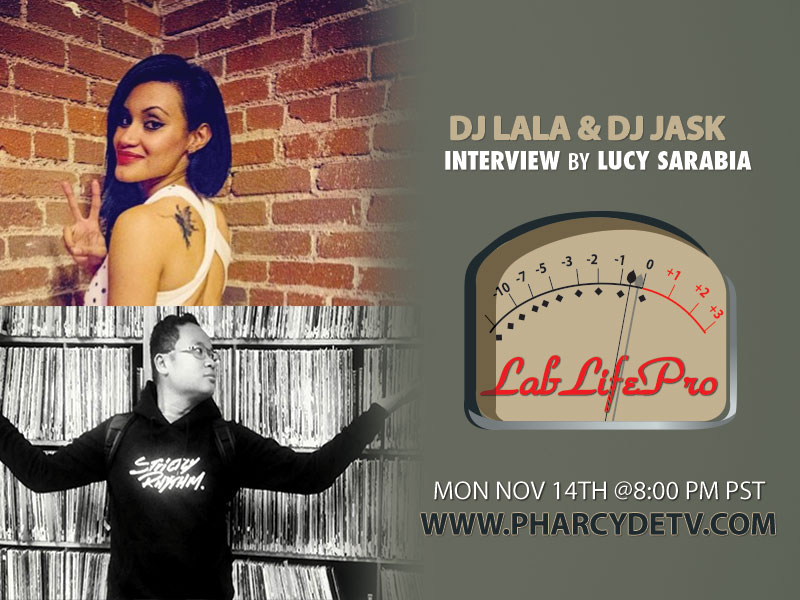 DJ Lala is the official DJ for Suga Free, Ill Camille, and 2Mex.  Lala is one of the leading female DJ’s in underground and westcoast Hip Hop.

She is a well known DJ, radio host, educator, and dancer. DJ Lala- “My family means the world to me. RIP mother, if it wasn’t for you I wouldn’t be where I’m at.  I am fascinated with all the elements of hip hop.”

I could of been opening up for Tiesto or other major artists but decided to not sell my soul to the devil! Peace and love to all the independent artist, DJ’s, emcees, dancers, taggers, painters one love.”

Lucy Sarabia caught up with DJ Lala at the screening of her film “The Girl From Lala Land” on June 25th and had the opportunity to ask her a few things about her DJ career.

In this interview with LabLifePro Lala talks about the first record she ever played as a DJ.  She also mentions that she has opened up for The Beatnuts and she is a resident DJ for Rhymefest LA.

DJ Lala also tell us what her favorite piece of equipment is mentioning the Rane SL57 mixer.

With more than over 2 decades of djing experience under his belt, Jask has touched the world dance community with his unique blend of deep, melodic, jazzphonic and soulful sounds. In ’87 Jask began djing at the age of 13. Influences consisted of soul, jazz, funk, r&b, hip hop, rock, new wave, disco, early electro & freestyle. A year later he would soon discover and quickly embrace a passion for the music that was coming out of Chicago & New York, known as the underground house sound. Jask was one of the major players to introduce the acid jazz sound to Tampa & most of central Florida in the early 90’s. He held Tampa’s longest running eclectic loungin’ night called, “Martini Jazz”. It took place every Thursday night at a club called the Castle which ran from ’94 to ’96. The “Martini Jazz” night brought some notoriety to Jask, which eventually led him to assist in the promotions of “Groove Collective’s (NYC) first ever performance in the Tampa area. In December of 1995, Jask started Tampa’s first weekly soulful underground house night called, “Jacks House”. During its successful over a decade ongoing run, Jask has played alongside various talented djs such as: Mark Farina, Dj Disciple, Benji Candelario, Marques Wyatt, Doug Smith, Brian Tappert , Miguel Migs, King Britt, Tedd Patterson, Tommy Musto, Kaskade, Pete Moss, David Harness, Rasoul, Julius Papp, Matthias Heibronn, Jay-J, Little Louie Vega, Frankie Feliciano, Karizma, Mark Grant, Johnny Fiasco, Diz, Collete, Heather, Tortured Soul, Cevin Fisher, Harry Choo Choo Romero, Cajmere, Lisa Shaw, JJK, Chuck Love, Mr. V., Alix Alvarez, JT Donaldson and many other luminaries in the dance music industry…As of Today, Jask still holds down Jack’s House(Tuesdays) and a new night called, “Paradise” which has become the new Underground house night in the Tampa area and features guest djs from all around the globe.

On the production and remix side of the musical pendulum, Jask has appeared on such notable labels as: Vega, King Street/NiteGrooves, I!Records, Swanky, Metaphor, K2/Vinylicious, Step Ahead, Erotic City, DeepTouch, Harlequin, SoulGroove, Soulfuric Deep, Soulfuric, Soufuric Trax, Catch 22, Deeplay, Solu, Om, Vino, Defected, Undo, Large Music, Salted, Sole Channel, Ultra, Hermosa, Delecto, Seamless, Rhythm & Culture, Guesthouse, Transport, NeoDisco, TSTC Records, Antho Records & SoulHeat . His most successful project to date is his release on Soulfuric Deep called Jask featuring Jocie “Beautiful” it was released at the end of 2001. This was Jask’s first original vocal track in which he wrote everything from the music to the lyrics with haunting lush deep vocals from Jocie. It is a special release in which Jask has dedicated it to his late mother who passed away July 31, 2001.

Unique in his own way, Jask brings an Asiatic essence that emanates patience and the Far East ideals of love and togetherness. With Jask’s contributions to music, he hopes to effect people in the most positive ways of life.